News about Altus, AltusLearn, and the greater medical education industry

How to Enhance your Decision Making 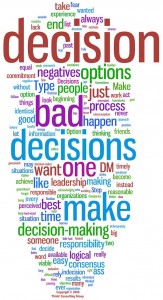 Clear up those unclear decisions

These articles on decision making skills will enhance your ability to quickly and easily make decisions. Some of these tips you may know, some you may not. Some are even contrary to popular opinion. At least when you come to implement a decision, having read these tips for decision making, you can say that you are well informed!  Commit! When you make a decision, you can do one of two things. You can spend a lot of time, effort and energy considering what it would have been like if you had made a different decision and searching the internet for more tips on decision making processes. Or you can spend that time, effort and energy on making your decision work. You get to decide. (Sorry, couldn’t resist it!)

Do the right thing

Many people want to do the thing right. In fact, it is one of the major reasons for delaying decisions. They want to get it right. Peter Drucker, the management guru, insists that it is much more important to do the right thing. Most people really do know what the right thing is. But because it’s difficult, disagreeable or uncomfortable, they choose not to make that decision. They choose something different. The consequence is misery. Only the amount and duration varies.

Here’s another great barrier in decision making to help you delay some more: The desire to make the best decision. In truth, there really is no way to know which is the best decision. Every decision will have consequences, so what people end up doing is comparing the consequences. This is all well and good, but it makes for an unclear decision. It doesn’t actually get anything done. It’s much more useful to consider whether a particular decision will be effective or not, within the frame you choose. People in critical situations quickly learn this decision making skill. Gary Klein has studied firefighters and medical personnel, people who make decisions in life or death situations. They just don’t have time to weigh up the pros and cons. They are asking themselves about the effectiveness of a particular option. If they think it’ll work, they go for it. If at any point along the line they realize it is not working, they choose a different route that they think will work. Then they do that. They will cycle one option at a time, until they find one that works. They improve their decision making skills with experience in their area of expertise, so their first option is not random. It is the one most likely to work. So it’s much more useful to be effective and get the job done than to spend endless hours trying to determine the best decision.

Again, this is a great one for delaying making that hard decision. And, of course, it’s a myth that you can be 100% sure with people. Humans are complex, dynamic creatures. Life itself is messy and unpredictable. And the future, well, that’s an unknown quantity. Period. Enough said.

Some of the decision support systems available include the experience, rules and regulations of experts in a particular field and use of these computer programs allow relatively inexperienced people to learn quite rapidly how to make decisions in that area. Obviously these systems are not available to everyone, but if you have the opportunity grab it!

Give it lots of thought – not!

Most of the decision making models and processes available are organized around assessing and understanding the issues at hand. The idea is to build your decision making skills so that you are not engaged in decision making without critical thinking, but rather you reason and think your way to making good decisions. Occasionally, it is suggested that you actually use your intuition. But not, however, at the expense of logic and rationality. To develop your decision making skills, this concept is one to pay attention to. There is an idea that we actually make our decisions emotionally, and then justify it with reasons and explanations, even excuses! An example would be making a decision to buy something that you cannot really afford, but somehow you find a reason that it would be useful to you. “The stereo costs more than my budget, but it would look great in my room and the great sound would allow me to work more effectively”. Sound familiar? Some of the newer sales training programs use this as the basis for their sales models. Why? Because it works! They know they can make more money using this particular sales model.

Not making a decision

There are no courses available matching your search criteria. Please try entering a different set of search options